ARIES (MARCH 21 – APRIL 20)
It’s the end of the term so you’re confused. After all, you’re not always the
best at recognizing what’s bothering you. It’s finals, not your friends. If you
stick to your work and you’ll be free from stress and able to enjoy the company
of your friends before you leave.

TAURUS (APRIL 21 – MAY 21)
Steady work could earn you time for a surprise date. Hope it’s your course
work instead of your FWSP job that’s keeping you so busy. END_OF_DOCUMENT_TOKEN_TO_BE_REPLACED 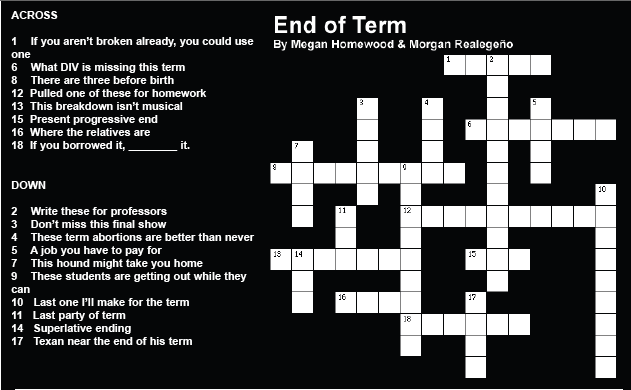 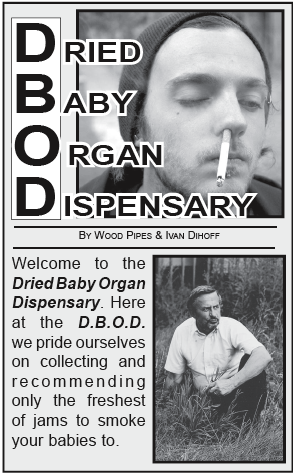 The following is a list of albums that were released this year that I did not have the space to review, but recommend no less. Hopefully you’ll see something that catches your interest and inspires you to look it up. Ummm…… yeah, smoke babies. Oh, and P.S., go to www.slsknet.org for the best file sharing program ever. Pipes!

END_OF_DOCUMENT_TOKEN_TO_BE_REPLACED

This is the final edition of this semester’s Record, and Wood Pipe (who will probably be called Peace Pipe as he takes over some of the work) told me that “IVAN KNOWS BEST” might be going down the pipe. This now gives me the chance to really, really fess-up. Yes I knew Best, but really not all that well. I only met her three years ago when she was working at Peaches. She was a bouncer, and I got bounced. That day (according to my weight calendar) I only weighed 153.5 lbs, so when she threw me out I rolled two or three time in the direction of Ha Ha Pizza. Best took pity on me and picked me up, told me to stop crying and that it would all get better soon. “Mama’ll take care of it.” She said. I kept crying cause I couldn’t see her mother anywhere. She should have been around because Best told me her mother was Better. I didn’t even know she was sick. Better came later and apologized ‘cause she had to visit Good. I didn’t ask and I didn’t care who Good was. So, the truth is that I do know Best, but not as good as Better, but better than Good. Here’s the truth: Best likes music, and when there is nothing for Better to do, she dances with her. Bad, the brother, just watches.

I beleive we would all agree that it is much easier to denigrate (how’s that for a word?), make fun of, and basically be unjustly critical of almost anything. One of the reasons is that criticism is unlimited and humorous comments are usually accepted in spite of their lack of serious reasoning. Which brings me to some of the writing I have enjoyed sending to the Record this semester. Such writing has attempted to be humorously critical and has avoided any serious reflection on the music I was asked to listen to. At first I really didn’t think that the “younger” generation would find any of this music interesting. All of it was relatively quiet, rhythmically controlled, and frankly very relaxing to me. – I was brought up on “one, two, three o’clock four o’clock ROCK, five, six, seven o’clock, eight o’clock ROCK..we’re gonna ROCK AROUND THE CLOCK TONIGHT… also “SHAKE IT ON DOOOWN BAABY, TWIST AND SHOUT…,we twisted, we jitterbugged, we were DANCING. The rhythm was what we wanted, what we needed, and what we got. The music was loud, and our brains vibrated in sinc with it. (It may not be necessary to mention that (even in college) we had no booze, and certainly nothing fun to smoke)…so we moved, we shook, we twisted and turned…and after that we got to our rooms, read, talked, or slept. This term, however, I listened to many hours of gentle, strange sounds…many of them quiet, produced without any strong beat, and eventually somewhat captivating. I still had to wonder…”What is going on?”…but eventually I realized that this were sounds musical or not, meant to reach the listener, encourage them to continue listening, and quite possible think, or relax. El perro Del Mar, for example, doesn’t make me want to jump out of bed and shake loose on the bedroom floor (I wear pijamas). Instead it provides simple, pleasant music with a clear but low keyed voice. I could listen to it, read at the same time and enjoy both.

So, I realize that I jumped two generations (I know nothing about the one in between, I had to do a lot of graduate studies and travel to far distances at that time) and I find that the music Dave gave me to listen to is very different. IGNATZ for example, provides an element of peace and (strange to apply to music) quiet…yes quiet!!! a quiet appreciation of productions that do not require people like me to shake and twist and turn. I learned, I expect to continue doing so, all of you don’t hesitat to come and help me!!!.

I promise you I have forgotten “jail house rock”