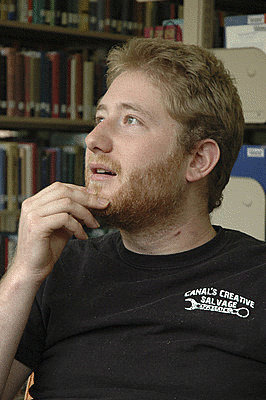 I recently had a conversation with Micah Canal, 2008 graduate of Antioch College, who came back to Yellow Springs in January to join the effort to support Nonstop and for the recreation of the College. He is currently working for the College Revival Fund.

Micah: I was born on the side of a mountain in southern Oregon, (where we lived) without electricity. My parents went back to the land in the early 70’s. They were hippies, sort of, but I am also part redneck because of growing up in rural southern Oregon. I have always walked that line of someone who embraces my redneck-dom and also someone who was raised by college graduates, and has had a fairly privileged life. I am one of the people who loved high school, rare among the Antioch diaspora.
I was supposed to come to Antioch in 2004, and I deferred until 2005 because I was in love, and I needed to stay on the West Coast. We (my classmates and I) were informed when we got here that something called the Renewal Commission had changed the college that we thought we would be attending. To this day I am still unclear as to why… there was no information that was conveyed to us or our parents that we were going to be a part of a new, untested learning model. That was a real shock.
Fela Pierre-Louis and Olivia Leire, and I organized the first year class in the first two weeks into something called the First Year Liason Committee. It was my first experience with organizing at Antioch, and what an interesting, difficult, troubling, infighting experience it can be. We became Antiochians … for three years, and some of us graduated, and most of us didn’t. There were sixty-seven people who entered with me, and of those less than twenty graduated. I think of us as the lost class, because we were the first under the learning communities, and some of us were the last ones out, and some of us are still here. That is my brief history about Antioch.
My major in one hundred words was Social Entrepreneurship and Economic Development. I studied economics and international relations. My focus was on change-making, trying to do it from the grass roots and also within institutions. All of my professional work has been in the non-profit sector, and I imagine that is where I will stay. That will be my life’s work: social entrepreneurship, building and contributing to organizations that do good works.

D: What brought you back?

M: That is a very complex question, especially because things have changed so much here. I came back, fundamentally, because I knew that there was unfinished business in Yellow Springs. I knew that my professors and my student comrades and so many of my Antiochian family were struggling to reach a goal that from afar, from 2500 miles away, seemed a lot more clear than it does here in Yellow Springs. I came back because I believe in a place like Antioch, a place that instills the values and ideas, and a place that is built on the motto that we come back to over and over again, ( “Be Ashamed”).

D: What is your job with the CRF?

M: I do communications work. I work on the web page and help to craft the news and the messaging that goes out to alumni. I work on the e-newsletter and the print newsletter. I try to help chapters organize and publicize their events. Being the youngest person in the office, you get stuck with helping out with people’s computers, and I usually make coffee. My job is largely computer based.

D: What is your analysis of the “Save Antioch” struggle?

There are a lot of different groups here and in the meta-Antiochian community who are working for different things. There is the Board Pro Tem, and the Alumni Board. The Alumni Board created Nonstop – or has been an important agent in the legal and financial creation of Nonstop. And there is the College Revival Fund. Within those organizations, there are different factions. There are people of different ages, different graduating classes, and they have different opinions. One thing about Antiochians is…it is our charming little downfall …that we all believe that we are the torch bearers. We all have the notion that our version is the correct version, and we have to save Antioch from all of the other incorrect understandings of what that word and this land means. I think that it is a huge part of the difficulty we are faced with right now. We have different notions about who carries the torch. Is it the alums? Is it Nonstop? Within Nonstop, is it carried by the students or the faculty? Is the torch carried by the land here? Once the Board Pro Tem gets it back–is that Antioch?
For someone who graduated in the 50’s, they are not going to recognize Nonstop as Antioch. We (the recent generation of Antiochians) believe and have strong connections to professors, a culture, and a staff that remain to some extent over at Millworks. The people who have the money it is going to take to save, to make this thing tenable for the next 155 years, don’t. This – this Olive Kettering Library, the Main Building, this is how they (donors) can relate, at least most of them anyway. And that is not an answer folks want to hear.

D: How do these competing visions impact our efforts?

Are we working on the same effort? I am not convinced we are. I am not convinced we aren’t. We are all communicating with other Antiochians out there, and we pass on our prejudices and our gripes about stuff that is happening here. I think that that process hurts our fund raising effort, it hurts our PR effort with the rest of the world. It hurts our image. It doesn’t build the forward momentum that we will need as an institution and a community to revitalize Antioch. Every one is working hard for their vision. It doesn’t matter what institution you are working for, whether it is Nonstop, or CRF, or BPT or the Alumni Board. In reality, I think our visions have more in common with each other than are different. We are focusing a lot on the differences.
We have an economy that is sinking. The situation in the outside world and here in the Antiochian community is like a perfect storm. We should be seeking whatever breaks we can get. We should be seeking whatever shelter and unity we can find, because it is hard enough, a big enough of a pipe dream to think of starting a college in this economic time.
I am optimistic. Antiochians are not good at faith. I believe that despite all of this, every one that I have talked to has good intentions. I have a lot of faith in Community Government. I have tremendous faith in Chelsea. She carries a lot of respect from all the different groups. With that respect she serves to unify us. The charisma of a capable leader is really important, and she holds a lot of that. The reason that she does is that she is very responsible about the way that she represents the ideas and the will of the community. She is a tremendously capable person.
I am optimistic about the innocence and passion of many of the young people involved. I think we should be listening to them more. Obviously, I am a young person, and take that how you may. I think there are a lot of very good ideas. There are ways to move forward in the hearts and minds of the most recent graduates. We should be reaching out to them. We may not have the deep pockets, but we have the energy, the wherewithal, and the ideas that are going to make any effort to recreate a college successful.

One thought on “We All Believe We Are Torch Bearers: An Interview with Micah Canal”