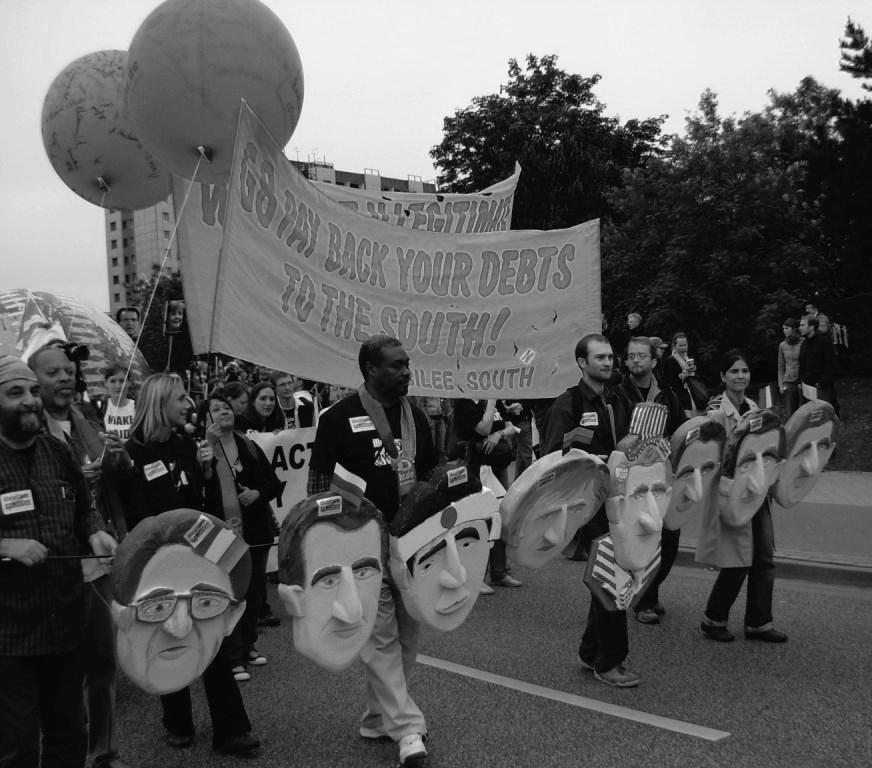 “Ya basta! It’s enough! Another world is possible!”

As I scan the innumerable websites organizing the anti-G8 mobilization, the familiar alterglobalization rallying cries remind me that I am on friendly ground. Yet the somewhat sketchy information about the camps, transportation and events is not easy to fi nd online even when one knows how to follow the white rabbit. Will there be enough space? Rides to the events? Showers and Internet access at the camp? No one really know but there’ll be (vegan, fairtrade) food and water, so there is no need to worry.

After Genoa, Evian, Gleneagles and Strelna, the leaders of the countries that are part of the exclusive G8 club are meeting in the little town of Heilidengamm, Germany. And as for the previous years, protest against the meeting is massive. “We do not want these selfappointed rulers of the world here or anywhere else,” says the statement for the International Mass Demonstration planned for June 2nd. Several tens of thousands of demonstrators from all round Europe are expected to make the trip to the Baltic Sea.

Strategies vary according to the degree of radicalism of the organizing group: several demonstrations are planned, but also a Social Forum-type alternative summit, and a downright blockade of the Summit itself. It will not be easy, though, as a 12 km long steel wall has been built around Heilidengamm just for the occasion, and more than 15,000 policemen are mobilized.

It’s not hard to recognize the people who are going to the G8 camp on the train that crosses North-East Germany from Berlin to Rostock: they look like a bunch of Antiochians. The word goes that they think they can deter us from coming en masse if they choose remote places for these meetings, like foggy Scottish villages or industrial towns on the Baltic Sea. Yet I still have to sit the floor as the train compartment fills up at each station.

all they feed us is Coke!”

In Rostock, the chalk-drawn arrows on the asphalt guide the protestors from the tramway station to the camp. Large Cardboard signs greet us: Welcome to Camp Rostock, Police and Fascist Groups Not Allowed. Volunteers are welcoming the newcomers at the information point; access to the camp is free, a donation of 5 Euros per day is recommended. My ultra-confi dential map in hand, (not to be distributed outside the camp at any cost), I walk down Rosa Luxembourg Alley trying to fi nd a place for my tent. Some organizations have allotted spaces, such as Greenpeace or the German Anarchist Federation, and most of their main tents bare “NO PHOTOS” signs. I do not need to show my member card to install my tent in the ATTAC area.

The fi rst camp gathering in the big circus tent resembles a huge Community Meeting, except without the ice cream. Principles for discussion and democratic decision making are put in place, a sophisticated sign language system is adopted to facilitate communication in large group discussions, and volunteers are called for different tasks. Sitting on the muddy hay, I volunteer as a translator in the french-speaking group, as the assembly is language-divided. The organizers emphasize the need to support the team watching constantly over the camp. We can be infi ltrated at any time, they tell us, by the police or neo-nazi fascist groups that are gathering for a demonstration the next day. Be prepared to gather at any time of the day and night in case of an alert.

At the dining space, at the end of Carlo Giuliani Lane, a few wooden tables are set up on the lawn. Free vegan dinners are served to the protestors who sit on the grass and mingle, their reusable plates on their lap. There are baskets on the tables to drop donations, and volunteers are washing the dishes in a corner. The camp is starting to fi ll up, and as the night falls an excited murmur arises from the camp.

On the next day, a pilgrimagelooking crowd walks toward the tramway station a mile away from the camp. At the Rostock central station, rows of policemen in green watch silently as a uniform mass of protestors makes its way towards the exits, slogans bouncing loudly against the grey walls.

Outside, the crowd is gathering on the main square, around a stage bearing the words Another World is Possible. Multicoloured fl ags are fl ying around and creative hand-made banners cry out their revolutionary messages: “Your words don’t feed the world”, “The system is a joke, all they feed us is coke!”,“Solidarity not Precarity”. Others have more precise demands: “US out of Iraq”, or “Public Control for World Bank, WTO and IMF”. Groups are gathered and sing in unison, while others improvise dance routines. Looking up, one can see a helicopter overlooking the scene.

The cortege starts moving almost on time. Standing on the side, I watch as 90.000 people walk past me: paper giants on stilts, carboard faces, bras tied to fl oating balloons are among the most creative parts of the cortege. atmosphere of celebration changes radically as tension builds up. Demonstrators are now all in black, with ski masks and sunglasses. They are walking as though in military formation, in tight rows forming compact squares. A few explosions can already be heard in the surrounding alleys and smoke is fi lling the air. As I make my way to the docks, the fi nal meeting point of the demonstration, I pass by a truck blowing out multicolored bubbles in the wind. Two young hooded alterglobalists are standing on the roof, and their song is going: “They make plans we make history.”