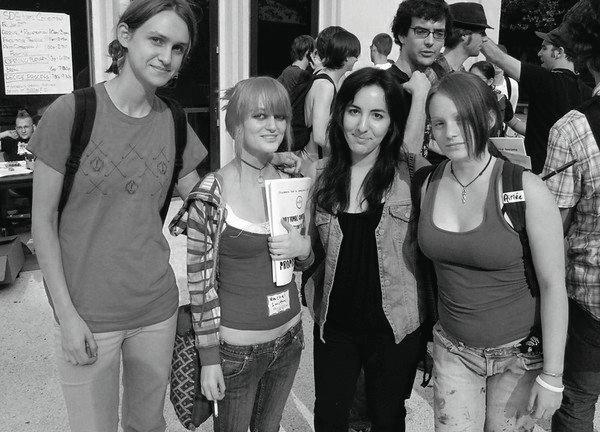 This Summer, Detroit, Michigan hosted the second national convention of Students for a Democratic Society (SDS) since 1969. Between July 27-31 at Wayne State University, nearly 600 students from around the country converged for four days of workshops on direct action tactics, communicating effectively, high school organizing, and media and facilitation trainings around the infamous student organization of the 60’s.

In an attempt to procure a national structure that would provide more transparency and stress accountability within the recently revived SDS, the Antioch delegation Aimee Keener, Rachel Smith, Lowen Gordon, and Jessica Rapchik, sat through fi fteen hours of mediated discussion a day.

Up until the last national convention, the structure of SDS was loosely connected, but effective. Hundreds of autonomous chapters across the country engage in actions that range from militant direct actions to petition drives. With the new national structure essentially little has changed. The new status quo requires ratifi cation from three fourth of the chapters to adopt agreements for dates of actions and provides a process for calling for national solidarity, still leaving chapters to execute actions and determine the issues that they fi nd important to organize around. This year’s convention saw the creation of several auxiliaries and attendees decided upon a process for chapter representation on a national level. 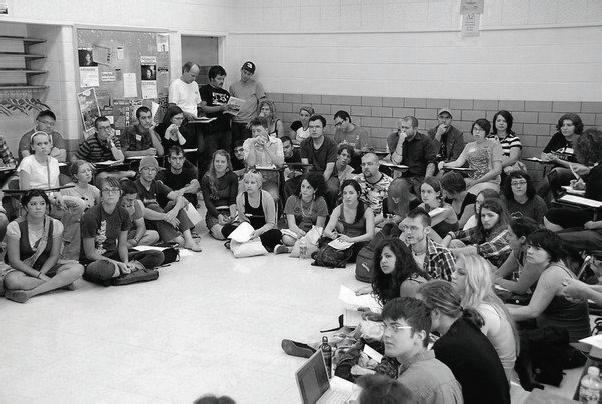 Despite long hours crammed into an auditorium, Antioch College SDSers attending the conference made it a point to inform other students about the tentative suspension of operations at Antioch and have fun after the plenaries were over.

On the fi rst day of the Convention, each chapter had the opportunity to describe their actions and accomplishments over the course of the last year. Jessica Rapchik took the stage to highlight the successes Antioch College SDSs have booked, as well as the historical legacy of the College within the sixties movement. Pleading for assistance in the national struggle around the uncertain future of Antioch College, she invited the crowd of 600 activists to visit antiochians.org and join the movement to keep the Ohio school with a vibrant history in activism from closing in 2008. A number of students pledged their solidarity, others offered their resources, and determined to visit campus in order to display bodied solidarity. Regardless of its size, Antioch is a prominent name in the new SDS movement.

As an example of this, the Antioch College Sexual Prevention Policy (SOPP) was used to shape “The Manifesta of Consent” the Women’s Auxiliary adopted during the Convention.

“I really felt empowered by this convention,” said Rachel Smith, a third year at Antioch who attended the full meeting.”SDS’ers are on top of their organizing and they are really able to display solidarity and think critically about the issues that affect us instead of skimming the surface like most radicals tend to do.”

Reflecting on Michael Albert’s speech at the end of the convention, Aimee Keener, stated, “I really liked Michael Albert’s speech. He defi nitely praised us for the way that we get along as opposed to how the old SDS functioned. That term that he used, ‘taking it to the mattress,’ which meant putting mattresses against the wall to stop the bullets from coming through, was a great analogy for how violently differences were handled. He said that the new SDS is able to respect each others’ differences without taking it to the mattress.”

Albert stated several times during the convention that there have always been fundamental differences between students of differing ideological strains in SDS that could often prove to be very contentious and could potentially limit our effectiveness. He stated that the original SDS would repeatedly win battles, but when it came to larger goals, it would crumple.

“The new SDS may fail repeatedly during its initial movement-building displays,” he explains, “but it differs from the old SDS in that we’re not organizing from the counter-culture, which means that we have to organize from general society, and also that we recognize that we are in this movement for a long term revolutionary struggle.”

It is this fundamental difference that directs SDS’s organizing. Instead of quibbling over tactics, the SDSers of today are able to unite on a common vision and strategy. Anarchists, communists, and liberals were able to sit in a crowded auditorium for fi fteen hours and leave with high spirits, plans for action, and unlimited support.

SDS at Antioch College meets regularly and should have an announcement pertaining to its fi rst meeting on First Class within the next week. Antioch College SDS can be contacted at sdsantioch@yahoo.com.