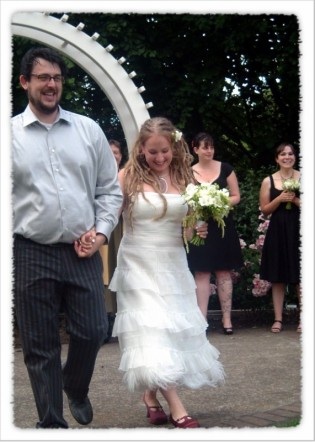 Pillow talk at Antioch: Alumni on how the college brought them together

On the one month anniversary of our wedding, my Antiochian husband (Pete Poiré-Odegard ‘03) and I are attending the Portland meeting of alumni trying to save the great school where we met, fell in love, and got the education that changed our lives in a hundred wonderful ways. One thing that crossed my mind as I contemplated Antioch and its role in our love was a number of beds we shared on campus, on co-op and in our lives as recent graduates. Sorry dear reader, this is not as titillating as it sounds.

I remember sharing a twin bed, and later upgrading to two twin mattresses on the floor in Birch. I remember sharing a bed in a sketchy hotel in the Albuquerque neighbourhood affectionately referred to by locals as “the war zone”. We had arrived to co-op without housing lined up and lived for several weeks in this hotel, which a few months later was closed due to drugs and prostitution. Our first night there we had to carve over the swastika on the head board (it became a smiley face).
We may have caused the financial decline of the school by stealing two mattresses when we graduated. Dreadful sorry everyone. I would give them back now if I could. Finally we got a real bed and real jobs and a real grown up life where we lived somewhere for more than four months at a time. And on June 22, 2007, one day after our fifth anniversary, we got married. My point in this silly anecdote is that the experiences we shared at Antioch, both on campus and off, have strengthened our relationship and reminded us that the possibilities are endless to those willing to take a chance, work hard and struggle for what they believe in. We’ve been through enough that when he says I love you in his sleep, I know he’s talking to me. We haven’t always (ever) had a lot but we’ve always had a lot of love. Reminds me of a school I went to…

Be ashamed to let it die.
Ashley Briscoe ‘03

Are you still with your Antioch sweetheart? Did you meet your soul mate in Yellow Springs? Tell your story to the Editor.