By the CCNWSS (Mariel Traiman)

It’s been a wild ride Antioch, a rockin’ rollercoaster of unparalleled highs, and unenthusiastic lows. Through it all I’ve been there, diligently reporting on every pulse pounding, bass thumping, hip thrusting, cream leaking minute of party passion. From our nervous and humble beginning at the Swan Island show (remember when you could still buy beer? That was sweet) to the sinful orgy of binary busting debauchery we call Genderfuck. How you’ve watched me grow from back in the good old days of shameful anonymity, to the time I accidentally made the whole school hate me, to the times you’ve come up to me with kind words of encouragement- maybe just to say “thanks for appreciating my dance moves.” So join me for a little trip down memory lane as I relive some of my favorite party quotes and moments of the semester. 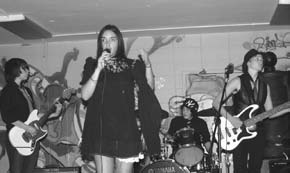 In an age of automatically locking doors with 30 second alarms, campus wide crackdowns reminiscent of the war on drugs, and a segregation between entering and older students that feels all too intentional; sometimes it seems like a party is all we need to inspire some campus wide solidarity. Last Thursday night first years got their first taste of the ritual beast that is the Antioch party. It was a balmy full moon night, and the mood was calm at first, but Prince and Michael Jackson soon got people on the dance floor. First years came and went as they bounced between their dorm rooms to clandestinely pound alcohol, and the dance floor where they were seen cavorting and trying out new and exciting dance moves. First year student Walid was seen impressing hordes of ladies with his fancy footwork. First year student Mariel was quoted as saying “ I felt a little awkward at first, people always dance in circles and sometimes those are hard to infiltrate. But then I really feel like I hit my groove, I had a great time. I got to make out.”

To quote third year transfer Kim-Jenna Jurrians “[The party was] Less timid than the last one. People seemed less reluctant to dance, less of a circle thing going on. I felt flattered from the lesbian community’s invitation to switch teams. Thanks Teddy.” It should also be noted that earlier in the night the same student was quoted as saying in regards to her footwear “I walk like a bloody peasant in these heels.” Of the night second year transfer Mariel Traiman shared “I put a lot of energy into my outfit and character, I think my performance was a little underrated. Sometimes I think I’m ahead of my time, I saw myself as maybe a young liberal senator’s daughter who just fell face first into a mountain of cocaine after Shabbat services. It was cool though, I got to make out.” First year student Riley Carpenter reminisced of the night: “It was awesome amazing, where else can you wear pantaloons and a turban. The girl with the rollerblades- I was a fan. And the pink pimp, that was pretty awesome. Also the gray pimp who actually looked like a pimp. ” Hey Riley, the cultural appropriation police called, they need to bring you in for questioning.

A point of controversy surrounding the evening was the actual queerness level of the party’s inhabitants. Perry Shoar was quoted as saying he didn’t bother going; “Because half the people there were straight.” Lauren Hind was quoted as saying “The party was as straight as the L Word. I was a little bit nervous, but I loosened up when I didn’t have to mark q for queer on people’s hands. I didn’t like deciding who was queer and who wasn’t. I thought I was the hottest power lesbian around.” Mariel Traiman was heard as referring to herself as “Kryptonite for straight girls” She also said of the evening “Best party yet. it’s how you’re looking when you’re doing it. Also I got to make out.” Emma Emmerich was quoted as saying “The lights were dim, the love was loud I could feel the vibes in my thighs, I have to say the most disappointing part of the night was when a straight person came looking for me. I was however glad they were turned away at the door. I enjoyed dancing with all the queer girls and boys, especially Mariel.” “It was awesome to be comfortable around people you see everyday and know who they are. The atmosphere was great and the people were better.” Said first year student Kelsey 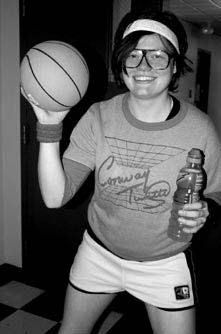 Other notable guests included a goose, a rat-tailed sailor, and Captain Kirk, Chris McKinless’ nipples were unfortunately nowhere to be seen. Mariel Traiman had to say of the evening “ It was fun. People looked good. I got to make out…a lot.” Her positivity is always appreciated in the sometimes sea of emotive ambivalence, for example when questioned about his feelings on the evening Wesley “Danger” Dawson had only to say: “The cigarette wasn’t worth 25 cents”. 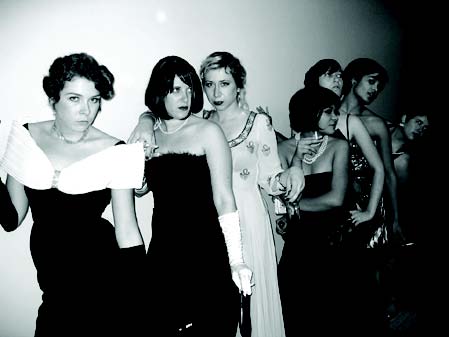 Black and Tan raised the bar for dance theatrics, leaving eyebrows quirked and gossipy drunken text messages scrawled across LCD screens. Marissa Fisher wanted to voice the following plea to the community “A little less ‘Cowabunga’ a little more chumbawumba.” And 2nd year transfer Mariel Traiman wished to send out an apology. “ I may have been a little out of hand… you see my hips don’t lie. There were some gratuitous levels of dance floor near fucking that maybe weren’t in the best taste, I guess I watched too many Prince videos when I was a kid… fuck it. I had a great time, I got to make out.” Her dance partner for the evening Erin Cisewski had a different, more wholesome take on things 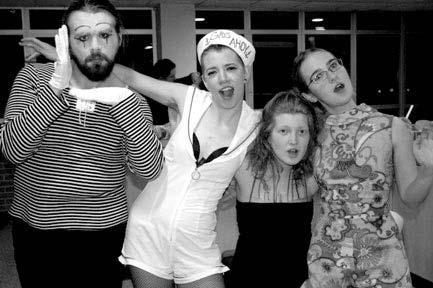 Boring was nowhere to be seen in the dance space, students of all shapes, sizes, and class ranks put their best ghoulish foot forward in a spooktastic show of gore splattered fright festivities. At one point I was unsure if I should keep dancing with escaped mental patient Caroline Debevic, or call the authorities, her elevated level of dangerous hotness urged me to go with the latter, as I threw caution to the wind. Yes community, I even danced with the devil that night, the Devil and Daniel McCurdy that is.

It was quality over quantity at dare I say- my favorite party of the term so far. I’d like to start my round of praises with a pink and purple heart-o-gram placed at the feet of the events staff who never cease to amaze me with their creativity and dedication to throwing a fucking rad party. Disgustingly beautiful outfits and workout films plucked straight from my wet dreams covered the walls, and Ty effortlessly coerced my eardrums into submission spinning hits of 80’s, masterfully avoiding the played out shit you dread when you see 80’s attached to anything. 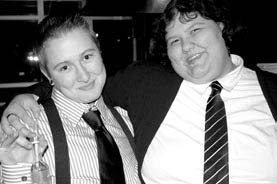 My first mystery prom c o u l d n ’ t have worked out any better as I had the honor of escorting the stunning Ms. Meghan Pergrem, who promptly set off fireworks in my heart and made me feel like the most special girl in school as she escorted me into Birch commons which for the night was transformed into a way less traumatic version of a high school prom. This time around I did not lock myself in my room with a bottle of my mom’s xanax and a copy of The Smiths’ Louder than Bombs-

So yeah, thanks for the good times. Thanks for giving me the space to be silly, and indulge childhood dreams of playing social columnist. I’ll see you this weekend at DIV, and next semester every chance I get to put on my Sunday best and dance my troubles away. I won’t even complain about the smoking ban. Lastly I’d like to give a special thanks to everyone who’s ever made out with me. That’s my why I stay.

P.S. Why was no one at the Lebanon forum, come on folks- step up.